Stanislav Khristenko and the Lviv National Philharmonic Orchestra of Ukraine, at Carnegie Hall 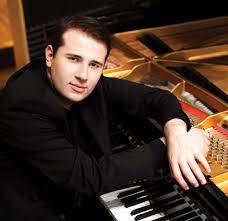 Founded in 1902, the Lviv National Philharmonic Orchestra of Ukraine is one of the nation’s largest and most internationally renowned ensembles. Its anticipated Carnegie Hall performance opens with a chamber symphony by revered Ukrainian composer Yevhen Stankovych, followed by Ukrainian-American pianist Stanislav Khristenko joining in Brahms’s First Piano Concerto. The second half of the program comprises Dvořák’s Ninth Symphony, “From the New World,” which, after its world premiere here at Carnegie Hall, was described as “the greatest symphonic work ever composed in this country” (New York Evening Post).