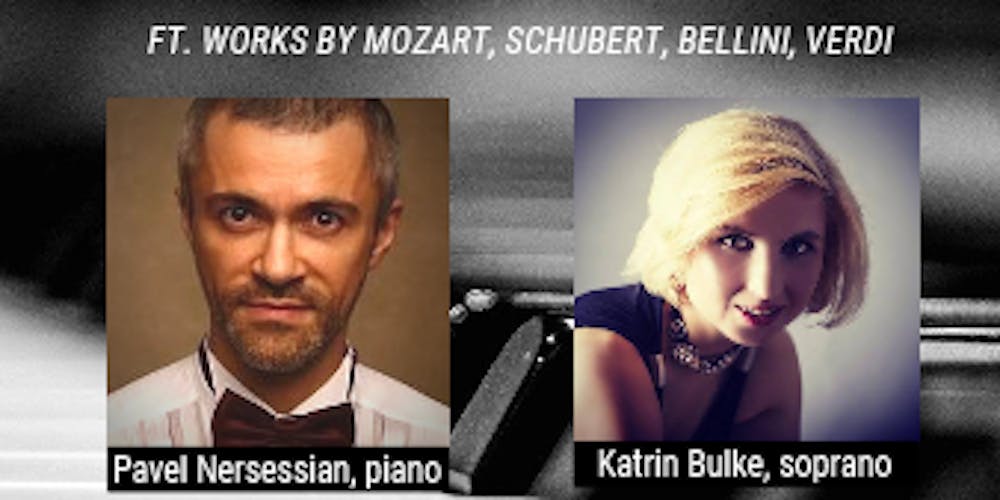 The Event:GetClassical, the Foundation For The Revival Of Classical Culture, and St.John's in the Village, celebrate their inititial collaboration in organizing school visits by great performers, with a season kick off concert on September 21st.
The Russian master pianist and the charismatic German soprano join forces with a gorgeous selection of songs and arias.

The Artists:
Pianist Pavel Nersessian is a Russian-born master virtuoso and educator. His moving and eloquent interpretations of a wide range of repertoire, have inspired audiences throughout Europe, Asia, South America and the United States. A student, and later on the faculty of the Moscow Conservatory, he often took over the studio of his famed mentor Prof.S.Dorensky, which included famed performers such as Nicholas Lugansky and Denis Matsuev.
Nersessian has won numerous competitions, including 1st prize at the 1991 GPA Dublin International Piano Competition. As a performer with a most genreous personlity and great intellect, Nersessian has collaborated in collaborative performances (among them Borodin and Glinka Quartet, National Symphony Orchestra in Russia, Thomas Sanderling, Ani Kavafian and the list goes on) and through his mentorship. Thought after as a pianist's pianist with a busy performance schedule, he holds the post as professor for piano at Boston University, since 2013.
Soprano Katrin Bulke is a graduate of the famed Mozarteum in Salzburg, soprano Katrin Bulke is quickly establishing herself as a powerful voice within New York's operatic world.  Only in New York since 2016, she has been part of ten different stage companies in such roles as: Rosina in Rossini's  Il Barbiere di Siviglia, Frasquita in Bizet's Carmen, Queen Elisabeth in Donizetti's Roberto Devereux, Donna Anna in Mozart's Don GIovanni, Amina in Bellini's La Sonnambula and Gilda in Verdi's Rigoletto, among others. The German artist impressed critics and audiences alike with her thrilling performances at the 2017 Caruso, and 2018 Concert Festival Internatiaonl Competition, where she received the Grand Prix.

Organizers/Mission: Our mission is to create encounters with great classical music performers in the classroom. Building on the personal momentum, we like to invite youth to attend the concert by those artsists, who inspire the next generation.

Evensong, Burial of the Alleluia, Cabaret & Pancake Supper at Saint John’s In the Village